Noting that the box label states ‘yellow’ which is incorrect for the model code and the model is green. 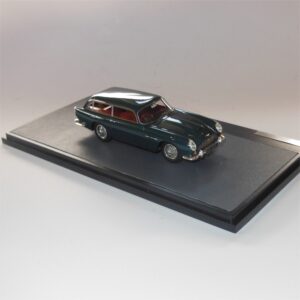 Noting that the box label states ‘yellow’ which is incorrect for the model code and obviously the model.

History of this model is interesting. David Brown found that whilst the DB5 was very much to his liking, but was a bit of a squeeze when he tried to carry all his polo equipment, hunting gear and dogs. The dogs also had a tendency to chew the leather seats. No problem – just ask the factory to create a shooting brake (not an ‘estate’ I hasten to add) for his personal use. But this created another problem that customers, on seeing David Brown’s unique Aston Martin, wanted one too.

At that time, the factory was way too busy just making the regular DB5, so David Brown made an arrangement with the coachbuilding firm of Harold Radford (Coachbuilders) Ltd. to make further shooting brakes to meet the demand. Radford were already experienced in building the not wholly dissimilar Bentley Countryman shooting brakes. The conversion was extensive and affected the whole car from the windscreen backwards. One problem with the conversion was that the tubular structure of the roof was cut away and the new extended roof was supported by steel fabrications thus reducing the inherent rigidity of the Superleggera system. The rear hatchback was a single piece hinged from the top and assisted by springs.

The interior was cleverly designed to hold as much as stuff as possible. With the rear seat folded down, the car offered an uninterrupted payload platform of 1.75 meters by 1.05 meters and a volume of 1.1 cubic meters, although with suspension unaltered, it would have been unwise to carry a large deal of additional weight.

As the mechanical and chassis specification of the car remained the same as when first built, the car was still claimed to reach 150 mph and was marketed with the tag-line ‘The world’s fastest dual-purpose vehicle’. Also Radford claimed the Shooting Brake would be able to brake from 100 mph to a standstill in 6 seconds, although we must assume this is without a heavy payload in the back. As each shooting brake began life as a completely finished saloon, priced at £4,412, the price of a finished shooting brake was boosted by £2,000 when ordered through AML. In some cases, customers also sent pre-registered cars to Radford for conversion too. Thus it is hardly surprising that only 12 were built (8 RHD and 4 LHD), all of which are believed to survive, making them the rarest DB5 variant.

Following on from the DB5 Shooting Brake, Radford went on to build another six similar cars based on the DB6.

There are no reviews yet.

Only logged in customers who have purchased this product may leave a review.

More Toys at Our Other Sites

In Australia, call us on