The model is mint loose condition with the protective case as shown in the photos. 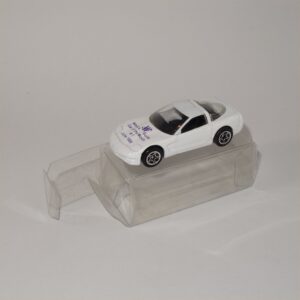 The model is mint loose condition with the protective case as shown in the photos. 1 of 1,500 produced by AD-Ventures Winchester VA.

The model was issued in this case and appears to be a Code 2 or Code 3 with the overprinting on the white hood of the vehicle ” White’s Guide Car of the Month #7 June 1999″ in purple print. Also known in red print with probably another 1,500 issued.

Apparently a promotional issue for White’s Guide the model is inconsistent with any of the ‘known’ releases other than a Chicago Cubs promotional model, which has different wheels to this one.

Overall a mint example of a less common promotional model.

There are no reviews yet.

Only logged in customers who have purchased this product may leave a review.

More Toys at Our Other Sites

In Australia, call us on